Home page
People & Horses
Who was Gliocco, the seller of Bagdad

Who was Gliocco, the seller of Bagdad 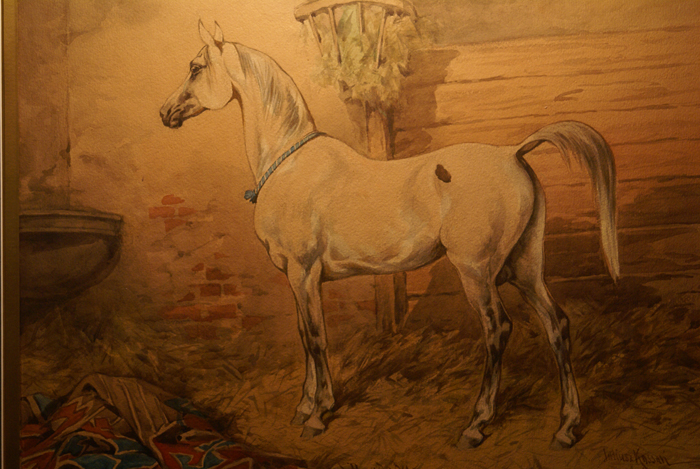 „A huge event for the stud at Jarczowce was the purchase of a grey desert bred Arabian named Bagdad by Kajetan Dzieduszycki from the well-known dealer Gliocco in 1840”, writes Professor Witold Pruski (“Dwa wieki polskiej hodowli koni arabskich” – “Two Centuries of Polish Arabian Horse Breeding”, page 65). “In 1840 this dealer brought with him to Lvov a group of Arabian horses which were highly sought after in Galicia. K. Dzieduszycki, learning of the arrival of Gliocco, journeyed several times to Lvov and wanted to buy the exceptionally handsome and refined Bagdad, but the Greek demanded an exorbitant sum and the purchase did not come about. So then K. Dzieduszycki sent his son Juliusz to have him try to bargain over the price some more.”

That event was described in 1904 by Stefan Bojanowski (“Sylwetki koni orientalnych i ich hodowców” – “Profiles of Oriental Horses and Their Breeders”, page 40): “In order to make the purchase Juliusz received a full purse of ducats in gold from his father, took all of his own money and went to Lvov by carriage, drawn by a team of four horses. Having looked upon Bagdad he became so enthusiastic that he not only gave all the ducats he received from his father and those which he took from his own coffers (and it is said that there was quite a lot in there) for the steed, but also sold the four carriage horses, the carriage itself, the rugs and a whip richly fitted in silver to gather the demanded sum for the horse. He travelled back to Jarczowce atop Bagdad, while the coachman returned home on foot.”

Bagdad, as further reported on by Professor Pruski, gave splendid progeny and raised the Jarczowce Stud to a much higher level. Several years later Juliusz, in his search for a stallion for Bagdad’s daughters, made his way to Arabia from where he brought, besides seven sires, also the mares Gazella, Mlecha and Sahara. Their significance for Polish Arabian horse breeding does not need to be emphasized. Bagdad’s son, Pielgrzym 1851 (out of Gazella d.b.) was sold to Babolna, where his name was changed to Bagdady.

A reproduction of a painting by Juliusz Kossak in Professor Pruski’s book depicts, according to the author, the stallion Bagdad himself, despite the inscription being not entirely accurate (Bagdady) and also the date (1890) proving that the piece was created when the stallion had already been roaming the heavenly pastures. However considering that the painter spent his time in Jarczowce in the 40s of the 19th century, the same period that Bagdad was there, as well as the fact that in the last decade of his life (as told by Kossak’s biographer Kazimierz Olszański in the book “Juliusz Kossak”) the artist painted from memory, repeating previous motifs, it can be presumed that the painting, today in the hands of a private collector, indeed shows the stallion sold to Juliusz Dzieduszycki by Gliocco.

This story, known very well to all Arabian horse enthusiasts in Poland, holds one question: who was this Greek dealer Gliocco? It turns out that his fate is just as fascinating and mysterious as the story about “our” Emir Rzewuski. His story has been described by Andrew K. Steen in the article „All the Queen’s Horses”. In Spanish and Anglo-Saxon writing he appears as Nicolás Gliocho. In fact Gliocco, being of Greek descent, was hired by Queen Isabella II of Spain at the end of the 40s of the 19th century. In search of superb horses he set out across the desert to lands being under constant war, right after the passing of a huge epidemic at that. He disappeared in the Nejd desert for an entire 11 months and we can only speculate about what he was up to during that time.

Isabella II (1830–1904), daughter of Ferdinand VII de Bourbon (1784–1833), King of Spain, has gone down in history as a ruler of an extremely corrupt court, overflowing with intrigues. She assumed the throne as a 13-year-old; three years later she was wed to her cousin, Duke of Càdiz. As A.K. Steen recalls, in May of 1847 the young queen felt a desire to purchase two Thoroughbred horses. Soon however she changed her mind and ordered the purchase of “three or four pure bred Arabian horses from Alexandria”. Perhaps this fancy of hers was influenced by the extremely rich and well connected Duke of Riánsares, a former sergeant of the royal guard, Fernando Muñoz, her stepfather (officially his relationship with the queen-mother and recent regent María Christina was not recognized until 1845, despite the couple having seven children – their eldest daughter, María Amparo, wed Prince Władysław Czartoryski of Poland) and at the same time horse breeder and owner of a stud with at least 100 mares. For it was him who decided to purchase in 1846 four Arabian sires and six mares directly from the desert. In short, the initially private import plan soon became a state affair. An amount of 120.000 francs was transferred to the account of a certain Antonio de Córdoba, remaining for years in the service of the Spanish government, who sent enquiries to all consuls in the Middle East – in Alexandria, Aleppo, Damascus and Beirut – about who could be entrusted with the difficult task of finding suitable horses. The answers were all the same: the best person for this task is the diplomat and equine expert Nicolás Gliocho.

The cholera epidemic raging in Damascus and soon in all of Arabia, Turkey and Persia caused the expedition to be postponed by several months. Finally, however, Gliocho set off from Constantinople (today’s Istanbul) in November of 1847 by ship across the Black Sea to the port of Samsun and later on horseback to Mosul. From there, at the special request of Antonio de Córdoba, he journeyed to the nearby ruins of Nineveh where he bought three Assyrian relief sculptures, as high as 60 cm and weighing 25 kg each. They reached Madrid in November of 1850, after the death of their buyer. Today they are exhibited in the Royal Academy of History in Madrid. Specially for their transport Gliocho acquired a Persian stallion of the Karavan breed, which became the father of draught horses in Spain. That and the relief sculptures are the only legacy that has survived the brave Greek’s daring expedition (which turned out to be his last) to one of the most dangerous regions of the world at that time…

After the „trip” to Nineveh Gliocho purchased 8 Arabian horses and left them in Mosul. Next he disappeared in the desert accompanied by the leader of the Fadaan Shammar tribe and a party of Bedouins. For 11 months he gave no sign of life, not even to his wife Sofía. In October of 1848 he suddenly gave word from Bagdad that he bought not 10, but as much as 26 Arabian horses (10 mares and 16 stallions) of the highest quality. Subsequent letters, arriving over the next couple of months, told of attacks on the transported herd, overflowing rivers and heat pouring out of the sky. They also told of the more and more deteriorating health of the then 50-year-old Gliocho.

Miraculously the Greek managed to reach Diyarbakir in Kurdistan together with the horses, as well as his trusted companion Jorge Frifili and twenty Arabic and Persian escorts. He died several days later. And so another expedition set off from Madrid led by veterinarian Martín Grande which was to retrieve the horses. A further 40 thousand francs was allocated from the royal coffers for this new expedition. The queen’s trusted people set off to Constantinople. At that time Gerardo de Souza, who replaced Antonio de Córdoba, hired the Pole Paweł Szymański who lived in Constantinople, to cross the mountains to bring the horses before the winter made it impossible. Szymański, paid for each day of his work, was in no hurry to fulfill his quest. He used the funds, which he received to pay for the boarding of the horses in Diyarbakir, for purchasing an additional 31 horses (not Arabian), which he intended to sell at a profit.

Meanwhile once again all news of the herd (which at that time already amounted to 80 horses) was lost. When it finally reached Ankara the horses were taken away from Szymański and he did not receive the promised payment. Whereas the horses he intended to sell were auctioned off and the sum achieved – considerable indeed, 28.800 piastres – was used to bolster the impaired budget of the queen.

Also the Arabian horses from that herd became a matter of dispute. Sofía, Gliocho’s wife, presented evidence that 13 of them were bought by her husband with his own money and so they were not the property of the queen. However the royal commission deemed that the death of Gliocho put the queen at risk of great financial losses and great concern about the fate of the herd. That’s how both the emissary’s widow and her seven children were left with nothing to live on. And so instead of 26, as much as 40 horses were loaded at Constantinople onto ships for Marseilles. During the journey Jorge Frifilli, Gliocho’s companion, was robbed of the royal money. Soon he was accused of misappropriating them…

From Marseilles the herd set off for Spain. In Bayonne the herd was entrusted to the care of the then queen’s lover – Marquís de Bedmar. On the 21st of November, 1850 the horses purchased by Gliocho finally found their way to the royal stables in Madrid. They were escorted by a picturesque group of about 30 Arabs, Persians, Greeks, Italians and French – some of them travelled to Spain’s capital from as far as Bagdad.

Sofía Gliocho did not give up. She came to Madrid demanding payment from the queen for her husband’s horses. After five months of endeavor this educated and stubborn woman lived to see the rehabilitation of Nicolás, as well as 150 thousand pesetas, which amounted to a small fortune at that time. Participants of both expeditions, including the unjustly accused Jorge Frifili and Martín Grande, also received appropriate payment and medals.

Isabella II, after years of ineffectual and corrupt ruling, was banished from Spain in 1868. “Narrow-minded, unable to see the country’s problems in a wider perspective than her private short-term interest, she undermined the royal majesty also by the lifestyle she led: in a rather unusual way she combined bigotry with remarkable erotic activity; during her rule a long line of – usually publicly known – favorites came and went through the Madrid court”, sum up her rule authors Tadeusz Miłkowski and Paweł Machcewicz in “Historia Hiszpanii” (“History of Spain”). All horses property of the queen were auctioned off for low prices. The desert Arabians were not lucky to find themselves in the hands of proper breeders and did not establish any significant sire or dam lines to today’s breeding. The only things remaining after Gliocho’s expedition are the Assyrian relief sculptures and two paintings by French artist Charles Porion (1814–1868), on which the painter immortalized the queen’s generals atop the splendid desert Arabians and the queen herself in the company of her husband and eight generals – all atop horses, for which Gliocho gave his life for.

The lots of Gliocho were reconstructed by Andrew K. Steen in his text “All the Queen’s Horses” 1999 (published at the website of the Spanish Arab Horse Society)

The article “Who was Gliocco, the seller of Bagdad” has been published in the quarterly “Araby” 17, 1/2010 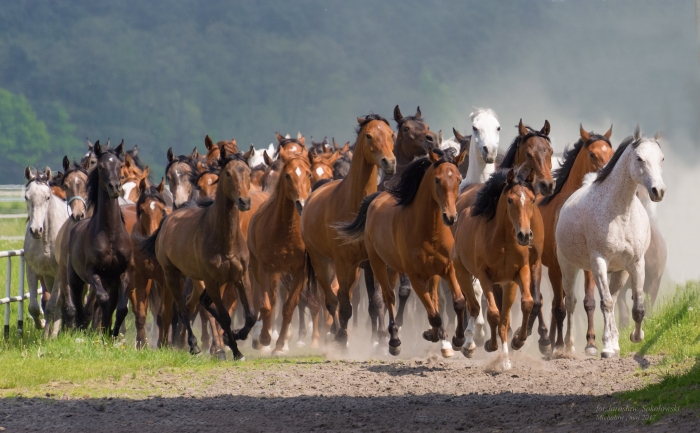 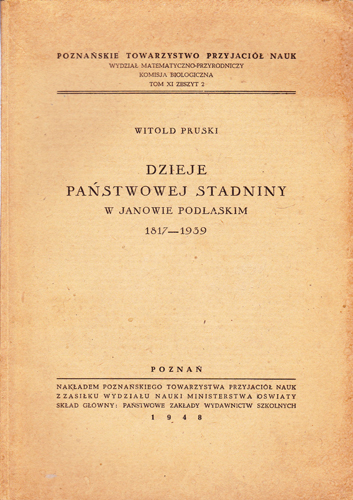