The „Pride of Poland – 49th Janów Podlaski Auction” was held on Sunday evening on August 12th and the Summer Arabian Horse Sale 2018 on Monday 13th. The overall result of both auctions is 734,000 euro net and 17 sold horses.

This year the organizers decided to reach back to the auction’s roots – at the beginning the auction was strictly an event for people associated with the industry, directed at potential clients and not an event for the masses. More focus was also placed on the Janów Podlaski brand, with a greater financial discipline than in past years. The guests were surprised by a new scenery, different than ever before. The indoor riding arena was transformed into an elegant, friendly interior. In turn the auction offer was smaller, but had undergone a greater selection in regard to the actual demand of the market. 12 horses were offered for sale – from the State Studs of Janów Podlaski, Michałów, Białka and from the private stud of Falborek Arabians. One horse (Lot 10 – Wilda) was withdrawn due to veterinary reasons, therefore 11 horses were presented for bidding. Clients were present from such countries as Israel, Kuwait, Saudi Arabia, Belgium and the Czech Republic. Six horses found buyers. The highest price was achieved by Michałów’s Parmana – 180 thousand euro. The total outcome of the sale was 501 thousand euro net. The prices can be considered satisfactory when compared to the current state of the saturated market. The auctioneer was Marek Grzybowski, a co-creator of the Janów event in years past.

Before bidding started for Arabian horses, a charity auction took place. Its outcome will be entirely donated to a family from Janów Podlaski that suffered a fire. The charity equine was none other than a pony named Ursus from Michałów and the auction was conducted by the director of the auction and president of Michałów Stud, Maciej Paweł Grzechnik and the auction’s announcer, Brian Scott. An amicable and full of enthusiasm atmosphere made a good setting for higher and higher bids. The final outcome was 5600 euro, which is a large amount for such an offer.

At the end of the auction the guests had yet another surprise – up for bid was the valuable copy of the manuscript by Wacław Emir Rzewuski titled „Sur les Chevaux Orientaux et Provenants des Races Orientales”. This incredible piece of art, published and presented by Dom Emisyjny Manuscriptum, had its Polish premiere right before the auction. There were several interested clients – after a fierce battle the manuscript was sold for 8 thousand euro. The lucky buyer came from Saudi Arabia and the bidding was once again conducted by Maciej Paweł Grzechnik and Brian Scott.

The auction’s director, Maciej Paweł Grzechnik, says: „I would like thank the entire team that worked under great pressure and among general hatred in the media. Despite that the event was a success. We want to thank the bidders of Lot 0, the charity equine. We also of course want to thank the buyers. Pleased buyers, who know that the event is custom made for them, are an investment for the future. We wish them many breeding successes. I might add that we really wanted to restore the brand of the Polish State Studs, a brand that has been somewhat lost in recent years. Now three Arabian State Studs not only organized the auction, but also the Open Day at Janów Podlaski. Here I would also like to thank our entertainers, the Cavalry Squadron of the Polish Army, as well as Katarzyna Cygler and her Equine Theatre and the wonderful groups that added splendor to the Open Day and Evening Gala: TULIA and „Rokiczanka”. Their fantastic performances were a great attraction for our guests and public”.

On Monday, August 13th, at Janów Podlaski the “Summer Arabian Horse Sale 2018” was held, during which 20 horses were offered – 19 mares and one stallion – from the studs of Janów Podlaski, Michałów, Białka and Dąbrówka Arabians.

The auctioneer was again Marek Grzybowski. 11 horses were sold for a total amount of 233,000 euro. The highest price was offered for Michałów’s Prosaria – 35,000 euro.

The director of the auction, Maciej Paweł Grzechnik, summed it up: “We are rather pleased with the final result, though it could always be a bit better. However both the situation on Arabian horse markets worldwide, as well as the constant attempts of torpedoing the Janów Sale, do not help in achieving success. That’s why we are happy that as many as 17 horses found buyers. I want to stress that the weight of the auction was placed solely on the shoulders of the three state studs, also in terms of finances. We have greatly limited costs in comparison to past editions”.

PDF version of the article 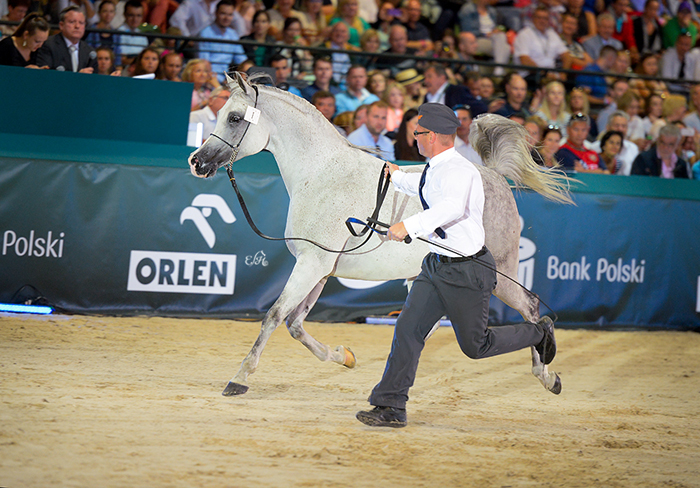 Menu
Copyright © 2004-2023 MLJ Consulting
All rights reserved
Licenses for some graphic materials:
Designed by Freepik
Legal information regarding materials posted on the Website
Created by: