The organizers of this year’s European Championships (25-25th of October), which took place in Belgium, had changed the place of the venue several times prior to the event. Finally they chose the Azelhof riding center near Lier (close to Antwerp) and this decision proved to be the right one. Many participants claimed that this arena offered more comfort than the one in Moorsele, both to the contestants (a more spacious ring) and the spectators.

The 2014 European Championships were without a doubt very satisfactory for Polish breeding and confirmed that the recent success at the All Nations Cup in Aachen was fully deserved. Polish horses (or those born in Poland) placed themselves near the top of the majority of their classes. Although the Polish national anthem was heard only once – when Equator took the gold – but just one final (the junior stallions) ended without a Polish horse on the podium. But then the Polish representation was very numerous – 33 horses, as well as several Polish-bred, but foreign-owned. In general the European Championships attracted many exhibitors – together with the geldings, Liberty, saddle and foal classes there were as many as 230 entries. Despite a very tight program there was still some time on Sunday for a spectacular show of the “flying Frenchman” Lorenzo, whose performances enjoy great popularity and admiration all over the world. This time he also didn’t disappoint. No wonder that everyone among the judges and organizers alike wanted to be a part of the collective photo at the end of his show. 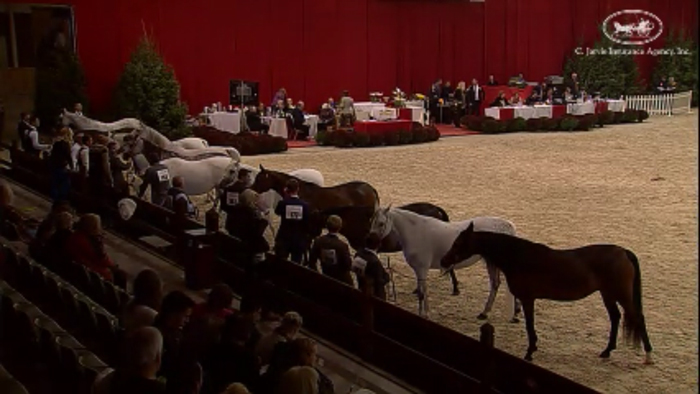 For the Polish team the show began with a bang, as two of the four yearling classes were won by horses from Poland: Michałów’s Pustynia Kahila and Morion (both by Kahil Al Shaqab and both already highly decorated). Second in their classes came Janów’s Al Jazeera and Ceranova (also the get of Kahil Al Shaqab), as well as Calateon (Vitorio TO – Calatea/Ekstern), bred and owned by Marek Kondrasiuk. Al Jazeera once again impressed all with her movement – she received 3×20 from the judges for this trait. Third place in class and the Best Head trophy went to the StanRed Arabians filly, Orla Turnia (by Shanghai E.A.), currently owned by Al Thumama Stud from Qatar. The top four horses from each class qualified for the finals, therefore on Sunday we also saw the fourth place holder, Lord El Shawan (FA El Shawan – Lady Serenada/Ekstern,) bred by Józef and Małgorzata Pietrzak, owned by Ajman Stud.

Many of the horses that placed at the top of their classes had competed with each before, as they had already clashed in Aachen or even in Nowe Wrońska. Two horses bred by Christine Jamar – Mounira J and Gallardo J (both owned by the Saudi Al Muawd Stud) – took revenge for the defeat at the Al Khalediah European Arabian Horse Festival in Poland. Also both of them, beside victories in their classes and later gold medals in the finals, took home the Best Head trophies.

And the finals (where similarly to Aachen and Paris all the “fun” started again from the beginning) brought Poland two silvers, for Morion and Pustynia Kahila; one bronze for Al Jazeera and a Top Five for Calateon. Another Top Five went to Orla Turnia, who was presented in the colors of her new owners.

Starting with the two year olds, the qualifiers for the finals included three horses with the highest score from each class. Polish representatives shined brightly in the A series of the 2yo fillies class – the entire top four was born in Poland! The winner was Piacolla by Enzo, bred by Michałów and owned by Athbah Stud, before Janów’s Patria (by Eden C), Michałów’s Emandorissa (by Abha Qatar) and another Eden C daughter from Janów, Paterna. In the B series the fifth place was secured by the Kurozwęki bred Cyraneczka (by Kabsztad), owned by Idris Hassan. The two year old colts saw the son of Espadrilla, Equiborn KA (by QR Marc) from Knocke Arabians, take second place, as well as the Best Head award. Fifth came Agordat (by Echo Ofira), bred and owned by Janusz Ryżkowski.

The three year old category brought a victory to Białka’s Perfinka by Esparto (on lease to the Saudi Al Muawd Stud) in series B. The A series was won by Mississippi J (by QR Marc) from Jadem Arabians. Among the three year old colts the class top five included Psyche Keret (by Khidar) from Chrcynno-Palace Stud, who was fourth. That very class saw the day’s highest score: 93,1 (including a 20 for type, head and neck, and movement) for Excalibur E.A. (by Shanghai E.A.), bred by Equus Arabians and owned by Las Rosas Arabians from Uruguay, who’s following in the steps of his sire and after winning the All Nations Cup and European Championships is setting his sights on the World Championships in Paris. As we all remember Shanghai was blocked by the power of Al Shaqab and had to settle for the title of World Reserve Champion. Maybe it will be Excalibur that makes his Triple Crown dream come true… Meanwhile it turned out that Excalibur’s score was not the highest of the show. That one belonged on Sunday to the gold medalist from Poland, Equator (94,2): 4×20 for type and 5×20 for movement! But let’s not get ahead of events. 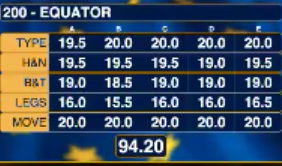 The junior finals gave a gold to Michałów’s Piacolla (owned by Athbah Stud) and the titles of Top Five to Białka’s Perfinka and Janów’s Patria.

Already the beginning of the show’s second day brought satisfaction to Polish fans and supporters of our horses. The 4-5 year old mares class was won by Primera (by Eden C), leased from Janów to Saudi Arabia – who also received the trophy for Best Head – before Michałów’s Zigi Zana (by QR Marc) and Diara (by Eryks). And so once again the podium was taken by Polish-bred horses. The situation repeated itself in the 8-10 year old mares class. Here victorious was Wilda (by Gazal Al Shaqab) from Michałów, with a score of 93,8, including 5×20 for movement. Behind her placed Janów’s Pepita (by Ekstern) and Michałów’s Pistoria (by Gazal Al Shaqab). Wasa (by WH Justice) from Falborek placed fifth. Poland also didn’t give away the victory in the oldest mares class. Here the best proved Michałów’s Emira (by Laheeb), before her stablemate Georgia (by Monogramm). 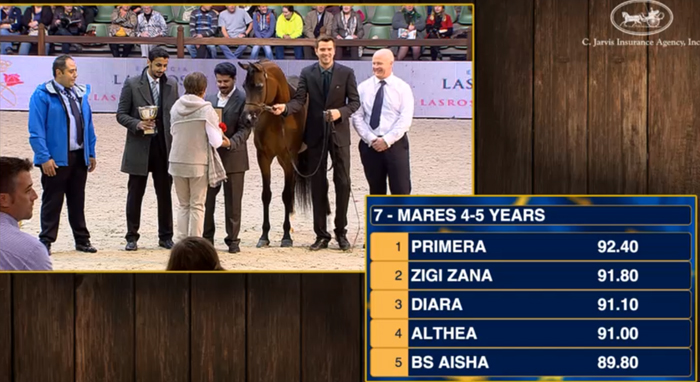 An interesting situation took place in the 4-5 year old stallions class – all the stallions from the top spots were out of Polish mares! Victorious proved the previously mentioned Equator out of Ekliptyka by Ekstern (with the show’s highest score), before the Belgian Espressivo (out of Emocja/Monogramm), the Janów-bred Etoryk out of Etnologia/Gazal Al Shaqab by Om El Shahmaan (owned by Flaxman Arabians, Belgium) – with 4×20 for movement – the Belgian Profender KA (out of Palanga/Ekstern) and Pomian (Gazal Al Shaqab – Pilar/Fawor), representing Janów Podlaski. 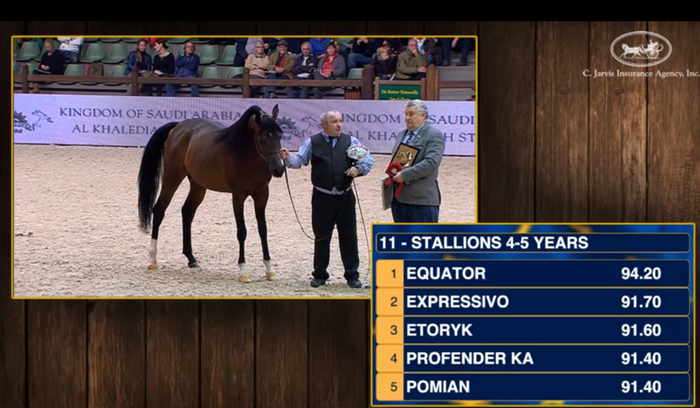 Among the 4-6 year old stallions (4 contestants) there were two our representatives: Echo Adonis (by Al Maraam) from Chrcynno and Eternal (by FS Bengali) from Mała Wieś. They placed third and fourth, respectively. Poland finished the competition with a strong accent, winning the 8-10 year old stallions class. The winner was Palatino by Pesal (Janów Podlaski). Second came the Polish-bred Altis (by WH Justice), owned by Turban Stud & Hany Edrees, who was also honored with the trophy for Best Head.

A most wanted man

The most joy – which was huge anyway – was provided by means of the senior championships. Apart from the golden Equator, who really had no competition, Poland could boast a bronze for Janów’s Palatino. But the greatest triumph for Polish breeding turned out to be the senior mare championships: the podium was taken solely by horses from Poland! The gold went to Al Muawd Stud for Janów’s Primera, the silver directly to Janów thanks to Pepita and the bronze to Michałów for Emira. A Top Five title was also awarded to Michałów’s Wilda. Speaking of the medal for Emira there was a slight disarray, as due to a misunderstanding her presenter, Mariusz Liśkiewicz, walked off the arena before the results were announced. The call for a comeback and the associated pause lasted for a while. This humorous accent definitely caused some stress for Michałów’s famous trainer. 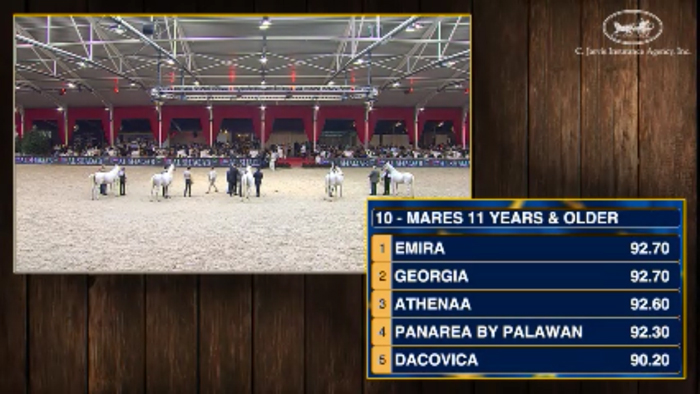 Now the Polish horses await the final and at the same time the most prestigious test of the season: the World Championships in Paris. They won’t have it “easy” anymore – though it never is. But Paris will be attended by those that have passed up the All Nations Cup or couldn’t compete in the European Championships due to the rules. Equator will definitely clash again with Eden C and Al Lahab. It is not known what surprises will be delivered by the Middle Eastern studs, such as Al Shaqab, Dubai Stud or Al Khalediah. However we can be sure that they won’t go down without a fight.

A unique opportunity to lease the daughter of WH Justice

Menu
Copyright © 2004-2023 MLJ Consulting
All rights reserved
Licenses for some graphic materials:
Designed by Freepik
Legal information regarding materials posted on the Website
Created by: