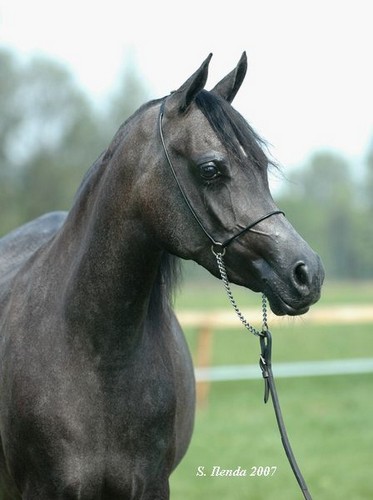 Polish and foreign guest saw the number of 160 Pure bred horses entered to 2007 Polish Nationals and they left the record total of over 2,5 millions Euro paid for 42 out of 51 horses put on the XXXIX Polish Arabian horse sale’s list at Janów Podlaski.

The number of 160 Polish bred Arabian horses of State and private Polish studs were entered for the Nationals this year. Even if the judges’ (Alia Al Hussein, Marianne Tengstedt,

Ferdinand Huemer, Janice McCrea Wight) notes have been very reliable and quite tough the quality of horses was so high that there were 33 horses scored higher that 90 points and 9 of them even crossed the note of 92!

Again, as two months ago at Polish National Spring Show that is the first to be held in Polish show season, the show has been very successful for Triplecrowned multichampion Ekstern (Monogramm – Ernestyna) as a sire of winning horses. Eight of his daughters were placed in classes’ top fives – as the private bred yearlings: Psyche Victoria (out of Pallas-Atena/Ecaho) bred and owned by Chrcynno Palac Stud and Pasadia (out of Pasadena/Eukaliptus) by priest Stanislaw Slawinski – that has been placed just before Janów-bred and owned Wołogda (out

of Wanilia/Alegro). Just after Pasadia and Wołogda the two Michałów-bred Galba’s daugthers have been placed – Golteria (out of Gotlandia/Pesal) and Ersefona (out of Ernera/Monogramm) but these two didn’t exceed the total of 89 points. And again the outstanding results of breeding Ekstern to Janów mares could have been seen. The first, third and fourth places of 2 years old fillies were taken by incredible Janów-bred Ekstern daughters – the 2007 Polish National Junior Reserve Champion Pinta (out of Pilar/Fawor), Biruta (out of Bajada/Pamir) and Etyka (out of Etalanta by Europejczyk). Top five of this class was closed with private-bred Eksterna (Ekstern – Emanta) from Falborek Arabians. Michałów State Stud has shown it’s potential beginning with mares 3 years old that took the first three places with phenomenal Gazal Al Shaqab’ daughters – Ejrene, Norma and Pistoria, the first

two being scored as high as 92. Especially Norma (out of Nina/Monogramm) was really impressive one scored with 2 “twenties” for movement but she missed points for type in tie with her stable mate Ejrene who won the class and finally became Polish National Junior Champion Mare.

Unfortunately there seems to be no leading sire of young Polish stallions entered to the Nationals so far. The youngsters’ classes were won as follows: by private-bred yearling Altis (by WH Justice) from Falborek Arabians and two years old Boreas (by Metropolis NA) bred and owned by Wojciech Kowalik, however there were also two HS Etiquette’s sons placed in two years old colts’ top five – Preferans (out of Preria/Ararat) and Elsynor (out of El

Fatha/Entyk) both bred by Janów Podlaski, while one of the favorites Janów’s colts – Pizarro (Gazal Al Shaqab – Pilar), the Reserve Champion of Junior Spring Show was third in the yearlings. Janów Podlaski breeders can finally be proud of 20 horses placed in top fives, three winnings and one National Stallion Championships won deservedly by Laheeb’s son – Poganin (out of Pohulanka/Pepton) that outstandingly shown his attitudes at the championships beating Eukaliptus’ son Grafik (out of Gaskonia/Probat) bred and owned by Michałów Stud. Grafik became Polish National Reserve Champion for 3rd time. He was scored 92 points in the class and his movement that has been presented with the rock’n’roll

music carried away the audience completely and the judges had no other choice than to give him 3 twenties for movement. Without a doubt this typically – slowly maturing Eukaliptus’ son is progressing every year becoming a handsome grey showy horse.

There were only 4 three years old colts competing in the Nationals. The class was won by another Ekstern’ son – Celsjusz (out of Carina/Pesal) bred at Białka State Stud. This correct young stallion becoming grey from the dark color that hidden him away from the judges’ eyes very often, was said to be the future Ekstern’ successor by one of the Polish Arabian horse

There are 15 Ekstern’s foals expected to be born next spring at Michałów State Stud so probably the 2008 crop of foals and the second lease of Laheeb planned for 2008 season as well, will bring the outstanding group of young horses to Michałów State Stud that we used to see every show season and that lacks since last crop of Gazal Al Shaqab’s progeny was born there 3 years ago. However Michałów-bred horses stay unbeaten at the elders still –

especially thanks to unforgettable Monogramm’s get as Palmira – the winner of 2007 Polish National Senior Champion Mare, Best in Show, the Best Mare of the Show and the Best Movement trophies (that last one won ex equo with her stable mates Grafik and Emocja); another Monogramm’s daughter – Emmona, class winner at Janów this year and past Top 10 World and Top 5 All Nations Cup Mare, as well as the first crops of Ekstern’s foals born at Michałów – as Palanga (out of Panika/Eukaliptus), 2007 Polish National Reserve Champion Mare or the show debutant, 4 years old Laranda (out of

Larissa/Eukaliptus) placed just after Palanga in the class. Ekstern’s progeny won one champion and two reserve titles at 2007 Polish Nationals in total and for sure not only Polish but also world’s breeding would need to wait long for another sire of this quality.

This time the most successful have been those private breeders who used Psytadel in their breeding programs in Poland. Fillies bred and owned by Lech Blaszczyk – Espiria (out of Ekspiacja/Monogramm) and Elfera (out of Eiffla/Ekstern) were placed 1st and 3rd in the class A of yearlings and Espinezja (out of Entaga/Ganges) bred and owned by Leszek Jarmuż won yearling fillies section B. All these fillies have been beaten by the older mares of Michałów and Janów in the championships but Psytadel’s owner – James Swaenepoel that has been watching this results at Janów himself could have been more than proud and happy. Józef Pietrzak – the first breeder that used Psytadel in Polish breeding and the stallion’s representative in Poland says: “James Swaenpoel was really surprised watching the results of breeding Polish mares to Psytadel. And not long ago some breeders were laughing at my

idea of using this stallion in Poland”. “We felt in love with Psytadel from the first sight”, Malgorzata Pietrzak adds. “We had been considering import of Padrons Psyche semen but when we saw Psytadel and his progeny we knew it’s not needed anymore since such a nice Padrons Psyche’s son is available in Europe. And he improves type and beauty of Polish mares so well”.

There were also a few private bred favorites in the older horses classes as well. One of them was 4 years old Primadonna (by Padrons Psyche) bred by Stanisław Redestowicz and owned by Tomasz Tarczyński. This chestnut mare with refined head and outstanding movement is already known from her foreign competitions. She was also a leader of her class for long time beating 10 other mares until Janów-bred Etnologia (by Gazal Al Shaqab) grabbed the first place being scored with 3 times “20” and 92 points in total.

The black horse of the late Saturday’s competitions for older horses was undoubtedly dark bay Etnodrons Psyche – also a son of Padrons Psyche, bred by Stanisław Redestowicz and owned by his son – Paweł. The judges were very generous for this stallion scoring him with high note of “19” for body and topline and 92 in total – the same as the class winner and Polish National Champion Stallion later on – Poganin (Laheeb – Pohulanka) from Janów Podlaski.

The nice entry for sale thrills were the championships held on Sunday morning and Janów Podlaski breeding parade that added some splendor to the stud’s 190th anniversary. There were not only the representatives of each Janów’ Pure bred dam lines presented but also a parade of outstanding Anglo-Arabian families of Cypresa and Tirana. After the parade some horses were awarded with traditional special trophies – including the Annual WAHO

Challenge Trophy to an outstanding representative of Polish Arabian Breeding – in 2007 given to Janów-bred 21 years old Sarmacja (Gil – Saszetka) – incredible racing and breeding mare, winner of Oaks and Derby as well as International Europa Prize and Stakes of Koheilan and Sambor at Służewiec Racecourse in Warsaw. Sarmacja herself won 8 out of 10 races she took part in but was also an unforgettable broodmare – dam of Sarmata, National Champion Stallion of Brazil and one of the best Arabian race horses in Polish history – Savvannah (by Monarch AH) – the mare almost unbeaten on the racetrack, always placed in money, winning 13 out of her 18 races including Oaks, Criterium, International Europa as well as Sambor, Koheilan, Białka, Ofir, Michałów, Kabaret and Figaro Stakes in Poland, second placed in 2001 Derby.

During XXXIX Sale for Arabian horses the buyers from 10 different countries spent over 2,5 millions Euros (2.541,900) for 33 out of 35 horses from the main list and 9 out of 16 put on Silent Sale. The highest sold horse was bought by Shirley Watts for 300 000 Euro. It was four

Most of the horses sold at 2007 Pride of Poland Sale will go to Belgium (7) however it is unofficially said that some of them will finally find their new home in the Middle East. 6 horses were purchased by Dubai including one of the sale’s favorites – Errara by Monogramm for 165 000 Euro. Also 6 horses (but not for so astronomical amount that in 2006) will be exported to Australia. Only two horses offered on the main auction were not sold. One of them was the first Arabian sport horse offered on Polish sale ever – the incredible showjumping mare Niniwa – twice European Sport Champion in 2006 and 2007. She didn’t reach the reserve price however her breeders and owners don’t seem to be disappointed having the first European Sport Champion of Polish breeding as a broodmare at their St. Roch Arabian Stud.

Polish breeders were less effective this year in buying horses. Some of them were bidding as

Sowiniec Stud owners on Altona (finally sold for 180 000) some others bid for Wiaźma and Laverna but only one mare was successfully sold in Poland. Beautiful Eldon’s daughter Firosetta bred by Białka Stud and owned by priest Stanisław Sławiński of Czeple Arabians has been an excellent broodmare bred to Ekstern 3 times with great results of colt Faronn – placed second at Junior Spring Show in Białka and Figurantka that competed at some foreign shows. The mare was offered for sale with another nice 2007 colt Fascyt by Ekstern and being in foal to Ekstern again for next season. She was finally bought for 53 000 Euro by one of Polish private breeders having the stud just close to Janów Podlaski.

The breeders meeting at Janów Podlaski is also a chance to purchase a horses outside or after the sale. Stallion Pereldon that was not sold during Silent Sale as well as his

stablemate Alpar will leave Poland amongst of others and one of the favorites at 2007 Polish National Stallion Championships – Milord Al Shaqab from Minnesota Arabians will join his previous stablemate Migrant sold to Canary Islands. And the future of Etnodrons Psyche is still being negotiated.

The prices for Polish Arabian horses are one of the highest in the world but the breeders from all over this world are still coming to spend huge money at small Polish village on Belarussian border. Even if Poland is geographically far away placed from the Arabian horse roots in the Middle East – this country is certainly blessed with great luck for breeding the desert horses still, offering the special impressions of being in very exotic scenery of East European village hidden peacefully in beautiful Podlasie region in Poland.

Arabian horses at the Sopot’s Hippodrome! 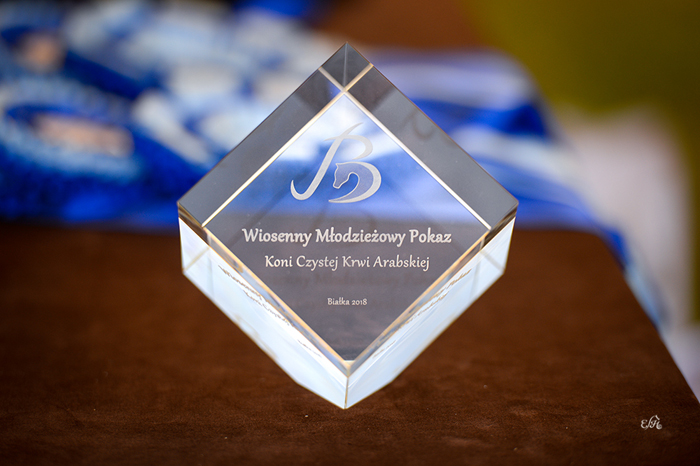 The first ever title of Best in Show in Białka for Białka!