Writing about 2007 All Nations Cup in Aachen we mentioned about the transactions that are being made on the back stage of show ring there – some of large and international scale.
Yet unconfirmed news about QR Marc considered to be one of the best sons of twice World and US National Champion Marwan Al Shaqab (Gazal Al Shaqab – Little Liza Fame by Fame VF) spread throughout the Aachen VIP lounge. And now we do confirm – QR Marc will come to Europe on 1st November!

QR Marc’s pedigree is even more interesting as his dam – Swete Dreams is full sibling to QR Excel! Swete Dreams represents Saklavi I sire line through Ruminaja Ali (Nazeer’ descendant) – prominent sire of champions and sires, grandsire of Gazal Al Shaqab (so QR Marc is in-bred to Ruminaja Ali’s line famous for it’s elegance and charisma). Swete Dreams’ dam line is that of Samirah db. born 1925 and imported to US by Albert Harris in 1931.

QR Marc himself, born 28th February 2005, as a yearling became US National Reserve Champion Breeders Sweepstakes Colt and Region 14 Futurity Champion Colt. Then he changed the owner bought to Rohara Arabians by Roxann and Karl Hart from Florida. Rohara Arabians is famous for its performance horses but it has done a lot to promote QR Marc as well. His semen was already available in Europe in 2007 via MT Training Center, Sweden.

But this seemed not to be enough for Belgian breeders that finalized the purchase not long ago. The amount of $4 million is being speculated for this colt by some US breeders considered as the best Marwan’s colt. His breeding fee was not specified yet.
The news about QR Marc’s purchase electrified the international forum. The new owner is Mr. Paul Gheysens. The stallion’s new home will be Jadem Arabians.

QR Marc may be an interesting idea for Polish breeders planning 2008 breedings especially when his sire’s semen raised up to the amount of $20 000. And his coming to Europe can be even more interesting when the owners would decide about his show career and 2007 World Championships entry – as QR Marc’s famous half-sibling and 2006 World Reserve Champion Marajj (out of RGA Kouress), that spending the 2007 season in US (Brookville Arabians) so far, came to Scott Allmann’s training center in Germany and is going to fight for the highest title again this year.

Interesting fact is that the beautiful QR Marc has a full sister too – yearling QR Marlaina is currently owned by Ajman Stud, UAE.
There are 14 pure bred and 4 half-bred mares in foal for 2008 to two years old QR Marc at Rohara Arabians. 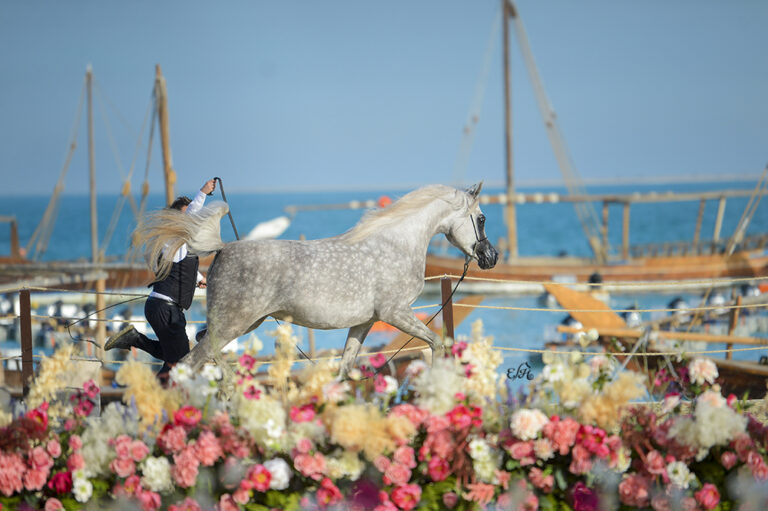