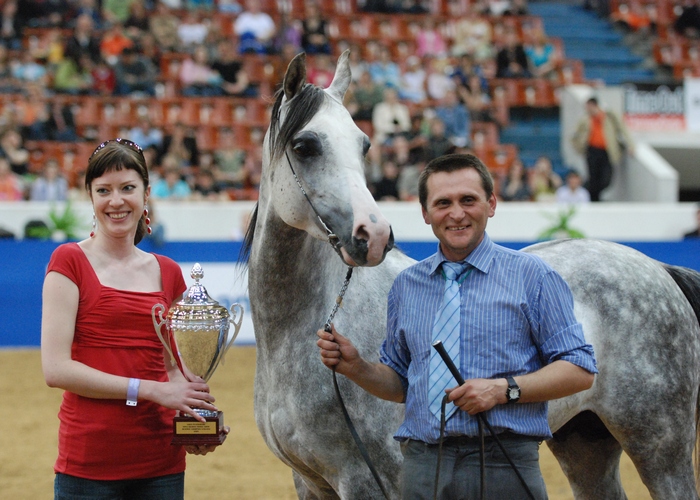 Earlier in the class competition Echo Ofira turned out to be the best among the 1-3 year old colts (with 126 points, including the highest scores for movement), behind him placed Rascal (121), third came Ferro (BS Black Fable – Forsycja/Fawor, br. Silvatica Black Arabians, o. Borys Pardus) – 118. Among the 1-3 year old fillies triumphed Garuna (130) before Belianka (Pobeditel – Byl/Pakistan) and Nis Psytadel from Tersk. The 4 year old and up mares class was won by Kashira (129 points), the 4-5 year old stallions class by Pilin Psyche (124). Second in that class was Fireball (123), fourth – Sortis (BS Ddiabolo – Silvatica/Fawor, br/o Silvatica Black Arabians) -113. In the 6 year old and up stallions class the winner was the Dutch Lobeke (128 points, including 3 highest scores for movement) – just like in the Liberty class. The Liberty class for mares was won by the Russian Madam Blius (Barkas – Molitva/Vatican), br. Veles Stud.

Polish horses, although victorious, did not present themselves as well as they could have. This was affected by a long and full of complications journey. The Russian border was crossed only thanks to the help of the veterinarian from the Silvatica Black Arabians team. But still the Poles spent about 10 hours at the border and later travelled by very bad roads.

The show was well organized, though there were some deficiencies – for example there was no disciplinary committee. The Russian horses competing against the Polish ones were

decisively worse prepared – often they were only washed, not to mention the presence of any trimming or make-up. Besides horses from Poland (and Russia) St. Petersburg saw steeds only from Holland and Kazakhstan. The show took place in an enormous indoor arena, nearly in the center of the city. It was judged by three persons: Irina Stigler (Russia), Janice McCrea Wright (USA) and Renata Schibler (Switzerland) and the scoring system was a bit different than the one we are used to in Poland and other European shows. The Poles who came to Russia consider this event as a successful one, though tomorrow they will again embark on the long, tiresome journey home.