While the Saturday performances delivered by the young Polish horses in this year’s All Nations Cup were not all that satisfying, the senior equines brought all Polish supporters much more joy. High scores, good places in classes (Polish-bred horses won a total of 5 classes) and finally 5 medals: two golds (Perfinka and Emandoria), one silver (Etnologia) and two bronzes (Pistoria and Palatino) – it’s hard to expect more! The Breeders Cup, also known as The Major Hedley Memorial Trophy (awarded since 2001), went to Poland already for the fourth time. The Nations Cup, or The Lady Harmsworth Memorial Trophy (awarded since 1980), headed to Belgium for the sixth time, but it must be said that many of the Middle Eastern owned horses are registered in that country. There was even a slight “diplomatic incident”, when during the decoration ceremony of EKS Alihandro (Marwan Al Shaqab – OFW Psylhouette/Padrons Psyche), the Junior Stallion Gold Champion owned by Athbah Stud, the Belgian national anthem was heard and it was not until the owners’ intervention that the anthem of Saudi Arabia was played. 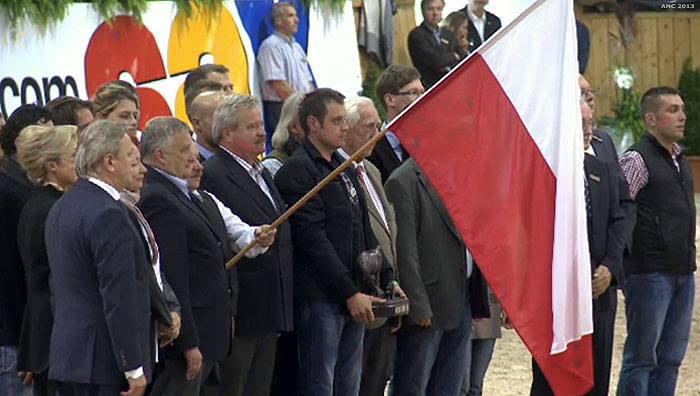 Without all doubt the greatest Polish triumph took place in the 7-10 year old mares category, when only one of the 12 contestants did not represent Polish breeding. That’s when the show’s highest score was awarded – 93,9 (including nine 20s) for Michałów’s Emandoria (Gazal Al Shaqab – Emanda/Ecaho), currently leased by Ajman Stud. During this class the announcer, Max Barth, publicly expressed his admiration for the quality of Polish bred horses, speaking about a wonderful breeding tradition, which guarantees a beautiful future. We should especially give credit to Lenka (Piaff – Ludmiła/Pesal), bred by Andrzej Majchrzak and owned by Przemysław Sawicki, in this difficult class. Her presence shows that high quality horses in Poland can also be found in private hands. Lenka received the same amounts of points (90,8) as Pinta (Ekstern – Pilar/Fawor, 90,8) owned by Shirley Watts and more than Białka’s Perolia (Gazal Al Shaqab – Pereira/Eldon, 90,5).

There was an interesting situation with Zigi Zana, who led the pack with a very high score of 92,7 (including three 20s for movement) right up to the very end of the class. However the last to perform was the US bred Abilene PCF (Legacy of Fame – Breath Of Spring Psy/Padrons Psyche), who achieved the same score as Zigi Zana, but slightly bested her with points for type. This was worth seeing if only for the incredible joy of the Italians from Azienda Agragia, the mare’s owners, who apparently did not expect a victory. Around 20 people came out for the decoration ceremony! In this class we also witnessed another interesting situation: a private purchase by Irina Stigler (namely Farah-Darina by Poganin out of Farah-Cegranta/Emigrant, bred by Andrzej Ou) gained a higher score (91) than the spectacularly bought via the Janów sale Palatina (QR Marc – Palmeta/Ecaho, 90,8). Out of Polish mares one more that qualified for the finals (from third place in the 7-10 year old mares’ class) was Etnologia (Gazal Al Shaqab – Etalanta/Europejczyk, 92,9), owned by Halsdon Arabians. In the finals she claimed the silver to the joy of Shirley Watts, for whom this year’s All Nations Cup was exceptionally successful also due to a junior mares’ silver medal won by Alfabia Akiabara. Zigi-Zana ultimately did not compete in the finals due to a sudden lameness.

One of the most interesting and most numerous classes was the 4-6 year old stallions. Among 12 contestants were two stars of Spanish breeding – Shanghai E.A. (WH Justice – Salymah E.A/Khidar), currently co-owned by Equus Arabians and Asayel Stud from Kuwait, and Abha Qatar (Marwan Al Shaqab – ZT Ludjkalba/Ludjin El Jamaal), owned by Al Mohamadia Stud. Victorious in this killer battle was the graduate of Marieta Salas from Ses Planes, who won his class and later took home the senior stallions’ gold medal. Shanghai E.A. this time had to settle for the silver, but we will definitely see a continuation of this clash in Verona and Paris.

Although in event of the most significance we usually have seasoned players with strong nerves, even here emotions and tears of joy can come through – as in the case of the experienced trainer and handler Katrien Van Dycke, who in the finals bested the favorite shown by her boss Frank Spönle. Quite unexpectedly Antaris OS (RFI Farid – Justina/WH Justice), bred and owned by Gestüt Osterhof (Germany) won the junior stallions’ championship over Prussia MI (Abha Qatar – Parada/Magnum Forty Four) of Australian breeding and Saudi ownership. The breeder and owner of the gold medalist, Karl-Heinz Stöckle, received a wonderful gift for his birthday, which he celebrated on Sunday.

Polish breeding definitely has reasons to be proud after the 2013 All Nations Cup. However Polish owners (Michałów and Janów) actually received only two bronze medals, for Pistoria and Palatino. Again it turned out that Polish horses have an easier time winning on international arenas in outsider hands than our own. Either way we saw a competition of extremely high quality and high standard, where Polish horses left a strong mark. Nobody should have any doubts that the strength of Polish breeding can’t be questioned.

Do you know that …

An article about the stallion Zeus E.A. published in Tutto Arabi magazine

Do you know that …

Poland can be seen from Verona, too

Menu
Copyright © 2004-2022 MLJ Consulting
All rights reserved
Licenses for some graphic materials:
Designed by Freepik
Legal information regarding materials posted on the Website
Created by: